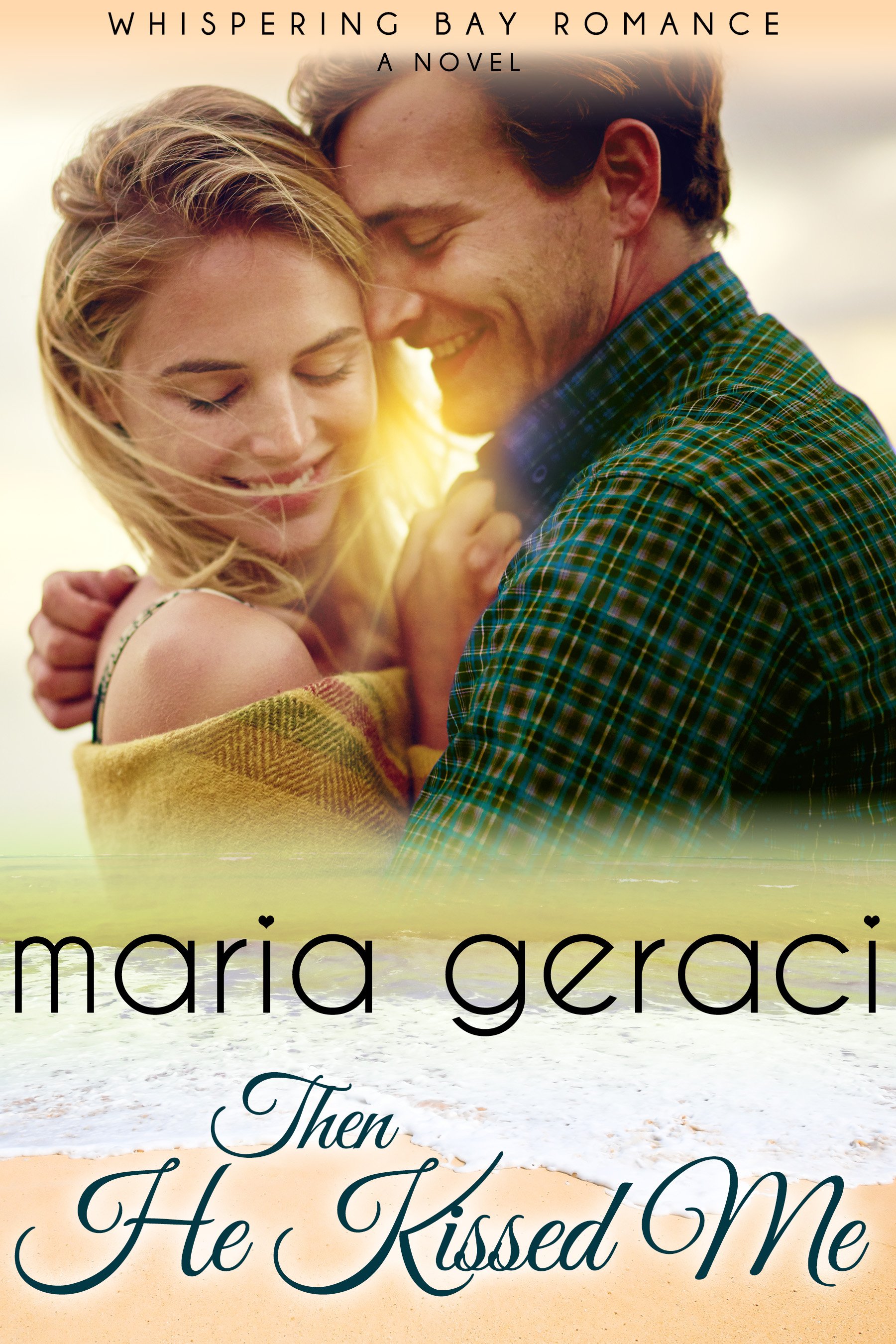 She was the beautiful blonde cheerleader.

He was the class nerd.

Can one kiss really change everything?

Lauren Donalan was once Whispering Bay’s golden girl—the rich, bubbly blonde cheerleader who married the high school football star. Now she’s a single mom trying to hold on to a failing business and prove that she’s more than just a trust fund baby.

Nate Miller might have been a nerd in high school, but he’s back in town ready to start his medical practice and every momma with a single daughter has their radar aimed straight at him, Lauren’s mom included.

Lauren doesn’t need a man to complete her, but when she finds herself set up with Nate, she can’t help but fall for the sexy confident ex-nerd. But only a big love will make Lauren change her mind about commitment.

As Nate attempts to win Lauren over, a real estate co-op threatens Lauren’s business—and Nate’s ex still has a thing or two to say about their previous relationship. Now Lauren has to decide to go big or go home, in business, as well as in love.

If Lauren Donalan were asked to rank the best day of her life, she’d answer hands down that it was the day her son Henry was born. She might have been eighteen and dumber than an armadillo, but she’d been smart enough to know a good thing when she saw it. Even if that good thing did wake up crying every two hours with a poopy diaper, wanting to be fed.

The worse day of her life wasn’t as easy to pinpoint. To be honest, Lauren couldn’t complain. God had been good to her. She and Henry were healthy, had a roof over their heads, and three square meals a day. A lot more than many people in the world. So, she felt a little guilty even thinking in terms of bad days. But if she had to choose among the not-so-stellar days of her life, it would be this: the day she told her parents she was pregnant (cue in hysterical crying from Momma), the day she asked Tom for a divorce (cue in her own hysterical crying), and the day she and Momma found out Daddy had Alzheimer’s (lots of crying by everyone).

If days could be measured on the pain scale, with one being the best day of your life and ten being the absolute worst, then Henry’s birth date was definitely a one and Daddy’s diagnosis day was a resounding ten.

Today had started out as a perfectly pleasant three. It might be mid-January, but living in north Florida had its advantages. The weather was an enviable sixty degrees, with low humidity and a crystal clear blue sky. Plus, it was Saturday, her busiest day at the shop. Henry was away on a weekend trip with his dad and while she missed her son, Tom was the best father in the world, so, no worries there. The beautiful weather had brought out the tourists, and while she hadn’t exactly been swamped, she had customers, as opposed to the usual window shoppers who came in to either a) use the bathroom, or b) take a curious peek inside—because, let’s face it, any shop called Can Buy Me Love tended to attract those sorts of persons who wondered exactly what kind of love she was selling.

After nearly a year of disappointing sales, today she’d actually turned a profit. Which was nothing to sneeze at. Lauren planned to celebrate in the best way possible—by putting up her swollen feet and watching (okay, re-watching) her favorite movie, It’s a Wonderful Life.

Most people thought of it as a holiday flic, but not Lauren. She could watch it any time of the year (any time of the day, really) because there was nothing better than a young Jimmy Stewart (sigh) fighting the forces of small town corruption. Add in a glass of Chardonnay and a bowl of buttered popcorn (with some parmesan cheese sprinkled on top) and she was in nirvana. Unfortunately, her mother had other ideas about how her thirty-year-old divorced only daughter should spend her evening.

“You didn’t forget you have a date tonight?” Momma asked, before Lauren could even get out a hello. Good thing they were on the phone and Momma couldn’t see the expression on Lauren’s face. Growing up, Momma used to warn her, “One day, your face just might freeze up that way.” It had worked all the way up to middle school. Yes, Lauren could be that gullible.

Out of habit, she smoothed out her scowl. “That’s tonight?”

“God Almighty, Lauren, do you know hard it was for me to set this up? It’s Ted Ferguson! Just the most eligible bachelor in all of the Florida panhandle. He’s a catch, and I don’t intend for you to let him get away.”

“You make it sound like he’s a prized mackerel I’m expected to reel in. Wait. Not the Ted Ferguson? The guy from Miami who tried to turn Whispering Bay into Condo World?”

Lauren had never met him, but everyone knew Ted Ferguson’s reputation. A couple of years ago, his south Florida based real estate co-op had come through town trying to buy beachfront property to build high rise condominiums. But the people of Whispering Bay, led by Kitty Pappas, a local realtor and friend of Lauren’s, had banded together and squashed the project before he was able to get it off the ground. Not that there was anything wrong with condos. Lauren was a native Floridian and smart enough to know that without tourism, the state economy would be hard pressed. But it should be up to a town’s own citizens whether or not they wanted to expand into the tourism realm, not an outsider from another part of the state.

“So he’s a little…aggressive in his business dealings,” Momma said. “He’s an entrepreneur, darling! That’s what they do.”

“How do you even know him?”

“He was at the Alzheimer’s charity event at the country club last week. And you can think whatever you want about him, but he gave a very generous five figure donation.”

“He’s rich and handsome,” Momma said, going in for the kill. “And, let’s face it, there’s not much in the way of proper husband material around here, especially not with you being divorced and having a child. A lot of men would see that as an obstacle. And before you get your panties all twisted inside out, you know I mean that in the nicest way possible. One of us has to be practical. Tom’s already moved on, it’s time you did, too.”

Momma loved reminding her that her ex had recently gotten engaged, a fact Lauren was thrilled about. Despite being divorced, she loved Tom (in that platonic-we-share-a-son kind of way) and had even been just a teeny bit responsible for getting him and his fiancé Allie together. But just because Tom had moved on romantically, didn’t mean Lauren was ready to. She liked being single. She’d gotten married at eighteen because she was pregnant with Henry. She’d spent the first eighteen years of her life living under Daddy’s roof and then the next eleven years under her husband’s. Other than the child support Tom provided for Henry, she didn’t take a nickel from anyone, and it felt good. She didn’t need a man to complete her. She could compete herself.

“Have you even been on a date since the divorce?” Momma continued, interrupting Lauren’s Jerry McGuire-ish moment. “Of course you haven’t, or I would have heard about it. You’re almost thirty-one, sweetie, you’re looking at your best years in the rearview mirror.”

“How charming. And I thought life started at forty.”

“Okay, but can we reschedule? I’ve been on my feet all day and I’m exhausted.”

“At this late hour? It’s already six-thirty and he’s picking you up at seven. No, absolutely not. Nana would roll in her grave if she knew how rude you were.” Lauren heard her daddy in the background. “Is that my Sweet Tea? Hand over the phone.” There was a momentary exchanging of hands. “What’s your Momma giving you a hard time about now?” he asked.

“Dan,” she heard her mother say. “Tell Lauren that it’s simply too late to back out on her date tonight.”

“You don’t have to go on this date, Sweet Tea,” Daddy said.

“What! Dan Handy, give me back that phone!” Momma screeched. Her daddy chuckled. “Listen, you can do what you want, but think of your poor old dad stuck in this house all night, having to hear your Momma talk about your big missed opportunity.”

Lauren smiled. Her parents were truly the happiest couple she knew. Especially when they were arguing. “I’ll do it for you, Daddy. And Momma, are you there? Of course you’re there. Listen up. I’ll go on this date, but no more fixing me up, got it?”

Her momma had control of the phone again. “Believe me, tonight’s the only date you’ll need. Now, wear the diamond earrings Nana gave you and remember, just one glass of wine. Men don’t respect women who drink too much. Oh, and for God’s sake, baby girl, please don’t wear any of that strange retro stuff.”

“You mean the strange retro stuff I sell?”

“Wear the cute little black cocktail dress you wore to Daddy’s retirement party. It made you look incredibly thin, but with just the perfect amount of cleavage.”

Lauren heard a momentary scuffling and then her daddy was back on the line. “Humph. Don’t listen to her. You don’t need cleavage. Dazzle him with that pretty smile of yours and he’ll be putty in your hands.”

Her mother snatched back the phone. Lauren was beginning to feel dizzy. “Don’t forget,” Momma said. “Seven o’clock. And no costumes!”