The Boyfriend of the Month Club – Discussion Guide – Maria Geraci 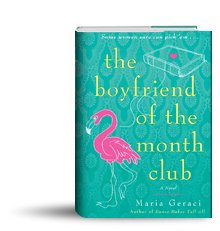 1. Discuss some of the incidents that Grace’s spiritual alter-ego, mal genio, gets her into. Why do you think she blames them on the spirit instead of herself? Do you think Grace is indeed inhabited by Mal Genio at times, or is it an easy excuse for when she gets herself into trouble?

2. Do you think Mal Genio has anything to do with the curse Grace believes has been cast on her love life?

3. Discuss the O’Bryan family dynamic and how it changes over the course of the book, especially with Pop as Grace’s boss.

4. Why do you think Penny said no to Butch’s proposal initially? Dis­cuss how and why things changed by the end of the book.

5. Why does Grace fight her attraction to Joe so much, especially in the context of the story?

6. Why do you think Grace isn’t swayed by Brandon’s apologies of roses and Dom Perignon? Is it a point of pride for her or more?

7. Grace feels guilty about knowing about Craig’s infidelity before his marriage to Sarah. How does that guilt manifest itself in their friendship?

8. Do you think the description of the Boyfriend of the Month Club as a “woman’s empowerment group” is apt?

9. Do you believe in Grace’s quote of “never say never” when it comes to men and dating? Was it smart of her to give Brandon a second chance, and do you think he redeemed himself in her eyes?

10. Do you agree with most of Ellen’s assessments of the men discussed in the club, especially Joe? Have you ever dated someone who fits a literary archetype?

11. Who is your favorite literary leading man or woman and why?

12. Do you think fate was at play to connect Grace and Joe? Did her relationship with Brandon confuse that or did it act as a contrast to what she truly was looking for?

13. Why isn’t Grace ready to introduce Joe to her family as her boy­friend? Do you think it has to do with his description of being dubbed a Wickham by the Club or is there another reason behind her hesitation?

14. Do you think most women want a hero in their lives, and might this be why the women deviate to literary heroes and villains in the Club?

15. Do you agree with Mami’s quote: “I don’t think you should put a timetable on happiness”? Was the Vegas elopement the right move for Sarah and Charlie? Why or why not?

16. Do you think the second chipped tooth was the sign Grace needed to realize she and Joe belonged together? Were there other signs she ignored?

17. Discuss how fate has worked for the characters’ love lives in the novel.

18. Why do you think Grace has always been afraid of true love in the past? Do you think she is finally willing to let the idea of the curse go? Will Mal Genio disappear as well?