This Can’t Be Love – Maria Geraci 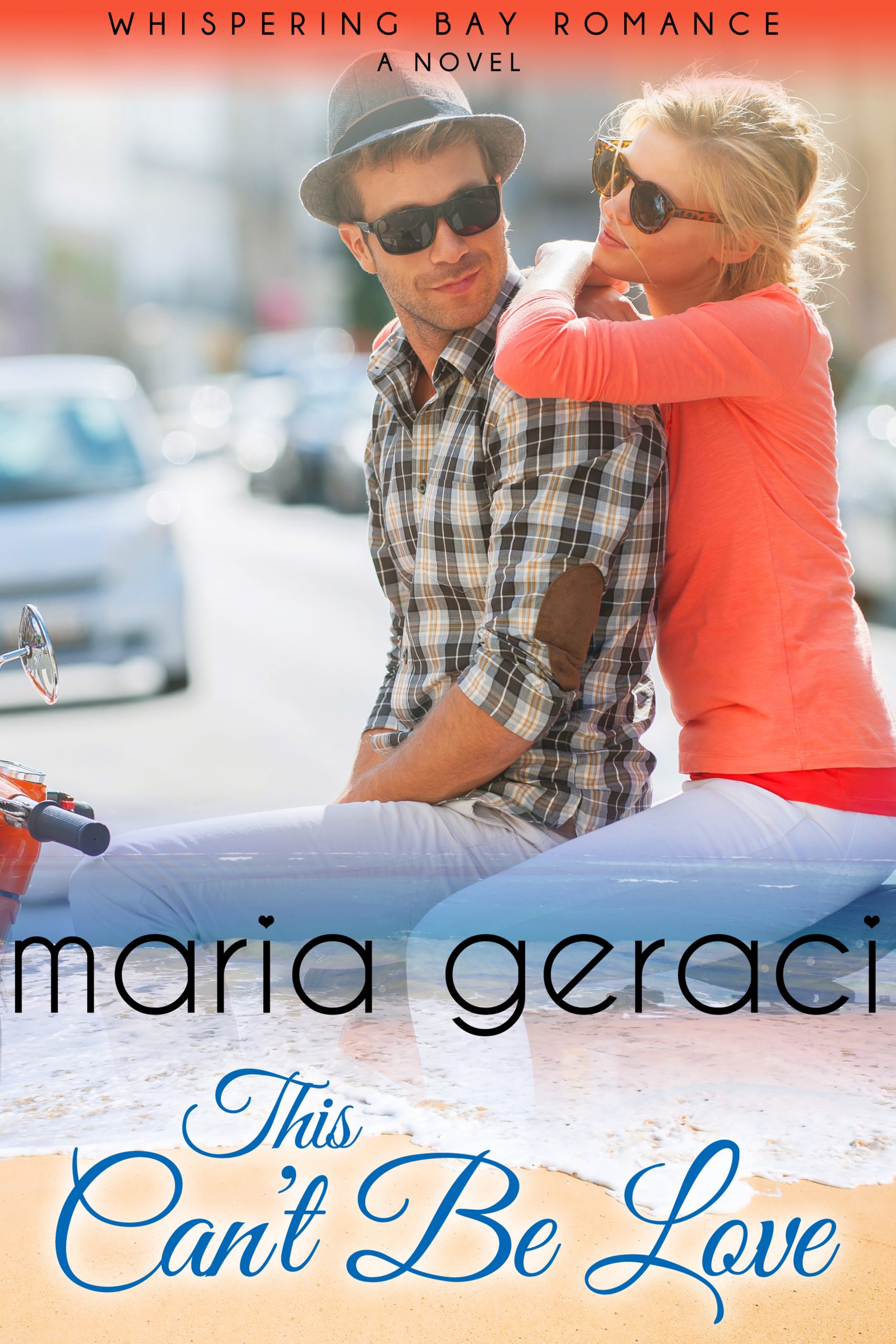 This Can’t Be Love

A 2018 Rita finalist for Best Mid-length Contemporary Romance of the year!

Luke Powers has a stellar career, a loaded bank account, and the perfect girlfriend. Or so he thought until she gives him a marriage ultimatum. Unfortunately, he’s just not the marrying kind. After working six months non-stop, all he wants now is a few weeks of R&R in the beach house his late grandfather left him in his hometown of Whispering Bay. But when he shows up late one night, he finds something unexpected—a naked blonde in his bed.

As things between them begin to heat up, Sarah and Luke have to admit, they’ve definitely fallen in lust with one another. But in love? No way.

“A 2018 Rita nominee for Best mid-length Contemporary Romance of the year.”
“Finalist in the 2018 National Reader’s Choice Awards for Best Single Title Romance.”
“Welcome to Whispering Bay where the gossip is good and the romance is racy! I enjoyed Luke and Sarah's story to the point of a belly ache! I laughed so hard at this dynamic duo! They were so wrong for each other that they were so right.”
-- Margie’s Must Reads

Luke Powers was recovering from a round of marathon sex when the gorgeous brunette lying next to him sat straight up in bed and hit him with those dreaded words no guy ever wanted to hear. “I think our relationship needs to go to the next level. Otherwise…” The ultimatum hung in the air, sucking up all the oxygen in the room.

He stifled a groan and took a deep breath. This was a scene he should be used to. Every few months, Torie would break up with him. He’d take it like a man, and then after a few days or even a week, she’d call, wanting to get back together and they’d resume their relationship like nothing had ever happened. After three years, however, the pattern was getting a little old.

“Give me a few more minutes and I’ll be happy to take it to whatever level you want,” he joked, hoping she’d go for it.

Unfortunately, she didn’t. “Luke. You know what I’m talking about. Either we get married or we break up for good.”

He froze. Torie had never used the M word before. He thought the “next level” was moving in together.

Maybe he should have expected this, but he’d always been honest with her. He wasn’t the marrying kind. Way back when, he’d made a point of telling her that on their second date. She’d laughed in response and said she wasn’t the marrying kind either. She worked seventy hours a week at her downtown Atlanta law firm and she was on the partner track. She was too busy for marriage. Or so she’d told him. Obviously, something had changed.

He sat up and shoved a hand through his hair. Her big brown eyes were filled with tears.

Aw, man. Luke hated crying. It was up there with those late night infomercials on starving children in third world countries and the emaciated dogs. He almost wished Torie was the angry type. He’d take temper tantrums and screaming any day over tears.

“Do you love me?” she whispered.

In all the time they’d been together, neither of them had ever used the word love. It had been an unspoken agreement between them. Of course he cared about her. How could he not? Torie was beautiful, smart, and accomplished. Yes, she could be a bit egocentric and high strung at times, but no one was perfect.

He thought carefully about how to answer.

“I love everything about you, Torie,” he said finally, calling her by the nickname that only he was allowed to use. To everyone else she was Victoria.

She slipped out of bed and began pulling on her clothes.

“Don’t.” She spun around and stabbed him with a glare that bordered somewhere between anger and hurt. I’m thirty-four and while you might think this is my biological clock ticking away, it’s not. Despite my better judgement, I’ve fallen in love you. And I thought… I thought that you’d fall in love with me, too. I thought if I just gave you enough time you’d come around.” She laughed, a sad little laugh that tore at his gut in a way he’d never felt before.

“So that’s it? We either get married or we’re through?”

“Yeah, that’s it.” She didn’t look angry anymore. More like resigned. Like a part of her had expected this.

Then he was off to grad school at the University of Charleston to get a masters in marine biology and the pattern repeated itself. A couple of girlfriends, but no one special. After school, he took a job with an environmental engineering firm that specialized in marine construction. He’d worked hard in those first few years to build up a reputation of excellence. He’d also learned how to play hard. While all his buddies were settling down with nice-girl-next-door types their mommas would approve of, Luke found that he enjoyed the single life. He liked going out with a different woman every weekend. Going to nice restaurants and having lots of nice sex. Most especially, he’d liked coming home to his nice empty apartment where he could kick back and relax and not have to worry about anyone but himself.

Eventually, he quit his job and together with a friend from grad school they’d opened their own consulting firm. For the past seven years he’d traveled around the country, making more money than he’d ever dreamed possible. He had an upscale condo in Atlanta, a beach house in north Florida, and a couple of million dollars tucked away in investments. He and Torie had a good thing. They saw each other exclusively and were together most of the time he wasn’t away from Atlanta traveling, which he had to admit, could sometimes be weeks at a time. For the most part, he missed her when he was away, and he’d been faithful to her. Maybe love was as simple as that.

She finished dressing, then turned to face him. “I love you, Luke, but I can’t be with a man who doesn’t feel as strongly for me as I do for him.”

He went to say something, what exactly, he didn’t know, but she cut him off by leaning over the bed and planting a kiss on his cheek. “It’s all right, I know you care about me.” She gave him a shaky smile. “But it’s just not enough anymore.” For a second, he was afraid she’d start crying again.

“The thing is,” she continued, this time in a hard voice, “I know that one day you’re going to fall in love. And I hope you’re happy. I really do. But…and I hate to say this, a tiny part of me hopes that she breaks your heart into a million pieces because I want you to know what I’m feeling right now.”

He watched as she picked up her overnight bag and walked out the door. A part of him said she’d be back. After all, she’d done this before. But something deep in his gut told him that this time she meant it. Torie was walking out of his life and she was never coming back.

Should he stop her?

He felt sad, guilty even, but the simple truth was he didn’t want to get married. He didn’t even want to live together. And if he didn’t want those things, then he couldn’t be in love with her.

The whole thing felt surreal. Unsettling, in a way he couldn’t quite describe.

And then it hit him.

Torie was right to leave him. She was the full package and she deserved a man who could reciprocate her feelings. But she was wrong about the other part. If he hadn’t been able to fall in love with someone like Torie, then it was never going to happen for him. He was thirty-seven years old. All his friends were married. A few of them were already divorced from wife number one and onto wife number two. His best friend and business partner, Ethan, just got hitched a couple of years ago and Luke’s younger sister, Mimi, had been married for eighteen years, with a couple of kids and a surprise baby on the way.

Marriage and kids… they weren’t for Luke Powers. Neither was forced monogamy, dirty diapers and making nice with your mother-in-law on Thanksgiving.

He rolled onto his back and stared up at the ceiling. He had a good life. Hell, he had a great life, one that he’d always dreamed of. There was no need to force something he simply wasn’t capable of feeling.