The Best for Last – Maria Geraci 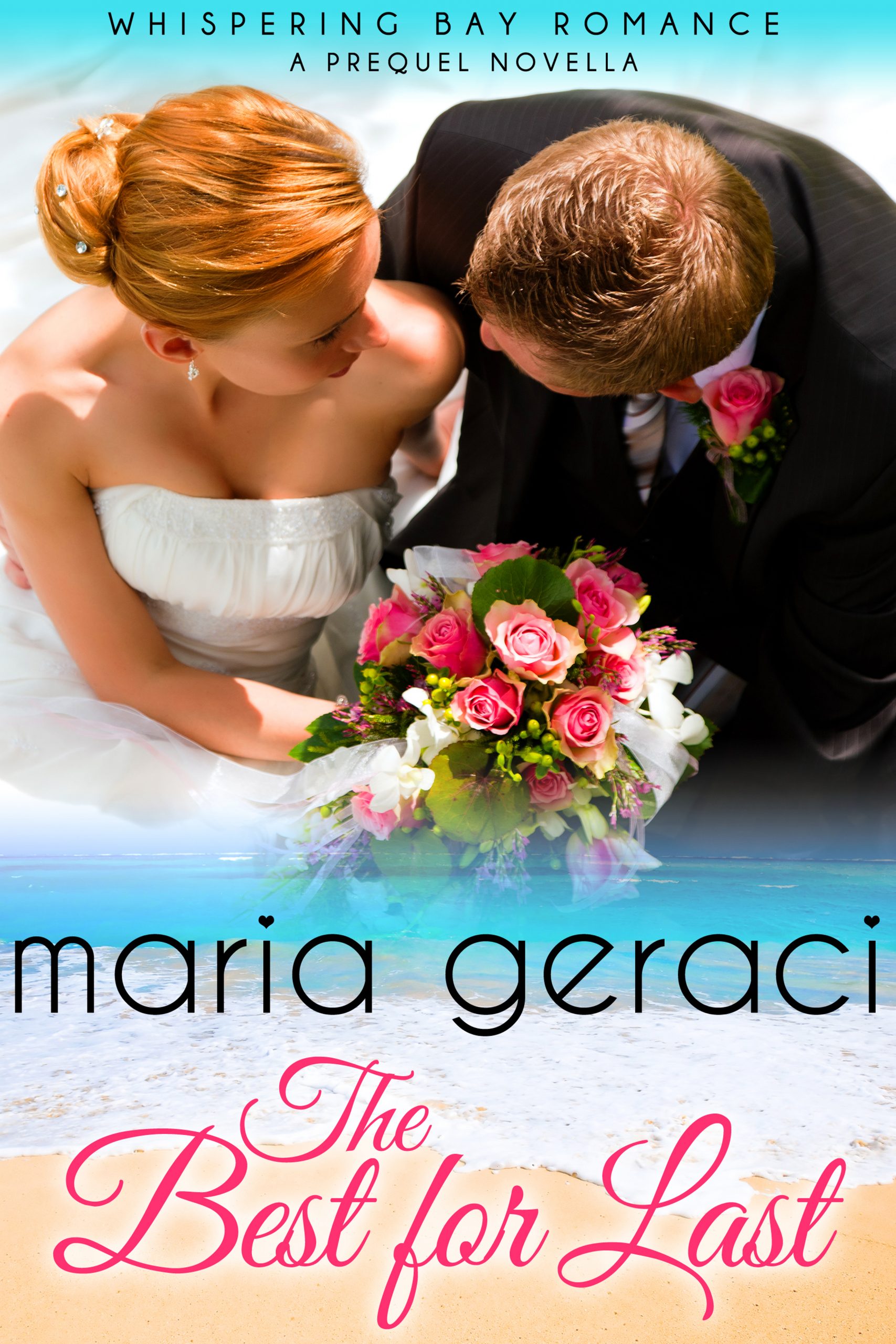 The Best for Last

She wants marriage and babies. He’s been divorced three times. Will she be forced to settle for happy-for-now instead of happily-ever-after?

But who wants to be tied down by marriage and a minivan when you have an amazingly sexy boyfriend who worships the ground you walk on?

Sure, Steve has never said those three magic words. But Kitty knows he loves her. Some guys just have a hard time expressing their feelings, right? Right.

After three failed marriages, Steve Pappas is in no hurry to walk down the aisle a fourth time. He’s a successful self-made millionaire, but despite the best of intentions, marriage is one arena he’s been unable to conquer. Kitty is funny, sexy, and whip smart—everything Steve has ever wanted in a woman. Their life is perfect the way it is now. So why rock the boat and ruin everything with a piece of paper that doesn’t mean anything?

When Kitty’s aging playboy father unexpectedly decides to tie the knot, Kitty realizes she’s been fooling herself. She does want it all—marriage, kids, but most especially, a man who isn’t afraid to openly declare his feelings.

Can she convince her commitment-phobic boyfriend to take the ultimate chance?

Or will she be forced to settle for Happy For Now instead of Happily Ever After?

“I loved Kitty and Steve! This is a great beach read! Perfect for the summer. Kitty and Steve are fun, sexy and very much in love already. Their problem? Steve has a problem voicing his feelings. Lots of misunderstood events and a town that doesn't know the meaning of "mind your own business". Hahaha!! I loved the ending best though! Highly recommended!!”
-- 5 Star Amazon Review
“A fun, quick read with enjoyable characters. You don't have to have read the others to thoroughly enjoy the novella.”
-- Linda, Goodreads Reviewer

Kitty Burke’s sex life shouldn’t have been the topic of conversation at her weekly Bunco game. Not when there were so many other worthwhile subjects to talk about in Whispering Bay. Like how the small north Florida beach town had just gotten an ice cream shop over by the high school. Or the new stop sign Mayor Bruce Bailey had installed near his home to slow down traffic. Perhaps those topics might have been a bit on the boring side, but really, whatever happened to respecting a girl’s privacy?

Kitty picked up her dice and tried for a bland smile. As the only single woman in the group, she should be used to her sex life being fodder for the other eleven women she’d played Bunco with for the past ten years. But she would never get used to discussing the lack (or in the case of the past eleven months, the abundance) of nookie in her life.

“Speaking of your man, I see him almost every morning when he comes in for his coffee,” Frida Hampton announced loudly enough that the occupants at all three tables could hear. Frida owned Whispering Bay’s premier coffee shop, The Bistro by the Beach. “I swear he gets better looking every day. How do you stand it?”

Eleven pairs of eyes turned to look at Kitty.

Steve Pappas, the man in question, had been Kitty’s steady boyfriend for almost a year now. They’d met the night of her thirty-fifth birthday, when the women from her Bunco group, affectionately known around town as the Bunco Babes, had thrown her a surprise party. She’d initially mistaken Steve as a male stripper (exotic dancer, if you wanted to be politically correct), when in reality he’d come over to fix her clogged-up toilet as a favor to his uncle Gus, a local plumber.

Steve had fixed her broken toilet, all right. He’d also ended up spending the night. Kitty still blushed whenever she thought about it. Katherine Burke did not have sex with men she barely knew. Except, in that one case…

“Ed is perfectly secure in the knowledge that I’m just admiring the scenery,” Frida said with a grin as she tucked an errant curl behind one ear. “But it’s not just me. The entire female staff goes gaga whenever Steve comes through the door. I’ve told them he’s taken, but, as long as there’s no ring on his finger…” She shrugged.

As long as there’s no ring on his finger. Kitty didn’t miss the not-so-subtle implication in that statement.

“It must be weird, huh? Having other women ogling your boyfriend,” Lorraine said.

“It’s a tough job, but someone has to do it.” Kitty hoped her flippant answer would make them smile and move on to another topic. She took a swig of her margarita and reached for a tortilla chip, smothering it in guacamole. Shea Masterson might make the best margaritas in town, but no one did chips and dip better than Mimi Grant, their hostess for tonight’s Bunco game.

Mimi loudly cleared her throat. “How long have you two been living together now? A long time, right?” Mimi was sweet, but her blue eyes held a twinge of something that made Kitty sit straight up in her chair.

A tiny niggle of suspicion slivered down her spine. Mimi’s question, while seemingly spontaneous, had a ring of conspiracy behind it. Add that to Frida’s sudden interest in Steve and… Wait. Had her Bunco group been discussing her love life outside of their weekly Thursday night game? Or was she being paranoid?

Maybe Mimi’s question was perfectly legit. Mimi was married to her high school sweetheart, Zeke, Whispering Bay’s chief of police, and had the perfect marriage. She hadn’t dated since Tom Cruise was still considered normal. In Mimi’s eyes, living with a man was probably a precursor to that Institution That Shall Not Be Named.

“Um, Steve and I have been living together for about ten months or so,” Kitty said. A fact the Bunco Babes were well aware of (since that had been last week’s main topic of conversation).

The niggling suspicion of just a few seconds ago was now a full-blown alarm. She rolled her dice and tried once again to get the game moving.

“Wow.” Pilar Diaz-Rothman, Kitty’s best friend since fourth grade, shook her head. “Ten months is a long time.” Pilar served as the city’s attorney. A politician, however, she was not. Pilar wouldn’t know subtle if it bit her in the ass.

“Is it?” Kitty said. Maybe she should pretend to have a headache and go home early. But most likely, they’d see through that ruse. It was probably best just to ride this out and get it over with.

Shea Masterson, Kitty’s other lifelong best friend, joined in. “Maybe ten months wouldn’t have been a long time, say…at twenty-five, but you’ll be thirty-six next week. Ten months in your thirties is exponentially longer than ten months was when we were in our twenties.”

“I thought time was supposed to move faster the older you got.”

“Not in relationship years,” Shea said. “It’s kind of like dog years. After thirty, every month you’re together is really like two.”

“You know,” Frida said. “Living together is all well and good. Ed and I shacked up for almost a year before we tied the knot, but eventually the cow gets tired of giving the milk away for free.”

The cow got tired?

If Kitty wasn’t so sure what all this was leading up to, she would have laughed.

“So, do you think the two of you will get married soon?” Pilar asked.

Bam! There it was. The question they’d been leading up to all night.

Kitty felt the dice stick to the palm of her hand. “Um…you know, Steve’s been married and divorced three times now.”

“Exactly,” Shea said. “So it’s not like he doesn’t know how to propose.”

“You have discussed it, right?” Pilar asked.

Taken individually, she might have had a chance, but when her two best friends ganged up on her like this, there was really no recourse. Except to lie.

“Of course we’ve talked about marriage!”

Someone in the room coughed.

Kitty was the world’s worst fibber. The Institution That Shall Not Be Named had never come up between them. To be honest, it wasn’t for lack of Kitty’s trying. But whenever she attempted to broach the subject, Steve would kiss her, or talk about taking a vacation, or buy her some outrageous piece of jewelry.

It wasn’t as if things were bad between them. It was just the opposite. Things were ridiculously good. Steve was everything a boyfriend should be—attentive, caring, supportive. He cooked; he cleaned; he opened doors for her and never let her pay for anything. And the sex? Even after eleven months, it was better than ever. Her life was perfectly happy. For now.

Kitty took another sip of her margarita. A really big one. “Is this an intervention?” she asked as calmly as possible.

Shea, who was sitting directly across from her, frowned. “I wouldn’t exactly call it that—it’s more like a…group self-help session.”

“We just want you to be happy,” Pilar said.

“Thanks, girls, but no need to worry. I’m deliriously happy.”

“That’s a relief!” said Mimi. “It’s obvious to anyone who’s seen you and Steve together that you’re crazy in love. The next step is obvious.”

“Speaking of which, who said it first?” Shea asked. “You or him? You’ve never actually told us. And you know how we adore hearing all the juicy details.”

Kitty drained the rest of her margarita. “Said what?”

“Oh, that… I can’t remember.” She tried for a casual laugh, but it sounded more like a donkey bray. It was her nervous tic. And the Bunco Babes knew it.

Shea laid down her dice and gave her a hard stare. “You can’t remember when the man you’re with first told you he loved you? Moose and I have been together forever, but I still—”

“Yes, yes,” Pilar said, waving her hand impatiently through the air. “We all know Moose said the big three after we won the state football championship back a thousand years ago. We’re not interested in you. We’re interested in Kitty.”

Shea snorted. “I was just trying to make a point.”

“Point taken.” Pilar turned her dark eyes back on Kitty. “So, how’d he say it, Kit? Did he take you to dinner? Or just blurt it out without warning? Or—”

“He’s never said it at all. Okay? Is everyone happy now?”

Oops. She should never have had that second margarita. If she could take the words back, she would. But it was too late. The silence of the lambs was nothing compared to the sudden, death-splitting silence of the Bunco Babes. Where was Anthony Hopkins with a sick Chianti joke when you needed him?