That Thing You Do – Maria Geraci 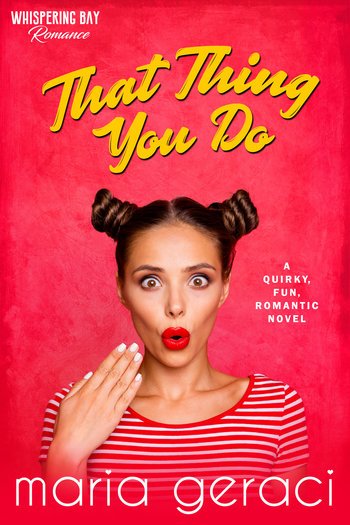 That Thing You Do

Once upon a long time ago, he broke her heart. Good thing she's too smart to fall for him a second time.

Allie Grant is a journalist who could use some luck. She needs a big story fast to secure her dream job, so when she gets a tip from someone in her home town about a haunted house, she hightails it back to Whispering Bay to investigate.

But wouldn’t you know the building is scheduled for demolition? And the guy in charge? None other than her high school ex—Tom Donalan, the boy who smashed her heart to smithereens.

Now Tom’s a single dad and, okay, sure, he had a good reason to break up with her all those years ago, but that doesn’t mean Allie’s just going to fall back into his arms. No matter how nice and muscly those arms might be.

Tom agrees to delay the demolition so Allie can get her story—but there’s a catch. He’s going to help.

Can Allie write the story, win the job, and get the heck out of town before history repeats itself?

“Quick! Someone tell me how I have never read one of Maria Geraci's books before now? As usual, I started That Thing You Do late one night and quickly finished it at an ungodly hour. I regret nothing!”
-- Crystal Blogs Books
“Maria Geraci proves that you can go home again. That Thing You Do is a fun read filled with quirky small-town characters, strong family ties, and a romance that's been years in the making. Readers who loved Kristan Higgins' Blue Heron series should visit Geraci's Whispering Bay. They won't be disappointed!”
-- Tracy Solheim
author of BACK TO BEFORE
“This tender story made me smile, it made me sigh, and it gave me some tears, and the tale will surely stay with me for a time.”
-- Five Spoons!
Book and Spoons Review
“A charming, witty romance set in an idyllic town filled with unforgettable characters that spark fire and chemistry from every page. You won't want it to end!”
-- Cindy Miles
best selling author of STUPID GIRL

Allie tried not to stare, but it was impossible. This certainly was not the Tom Donalan of her fantasies. The ones she had (only occasionally) after eating too much Ben and Jerry’s Chunky Monkey and watching her Persuasion DVD (the version starring Rupert Penry-Jones). In that world Tom Donalan had a beer belly, was bald, and missing a couple of front teeth. A lot of deterioration for only twelve years, but, hey, a girl could dream, right?

This Tom Donalan, on the other hand, had far superseded the promise made by his high school boyish good looks. Tall. Broad shouldered. With a full head of dark blonde hair and piercing blue eyes. He stood there staring at her with his arms crossed over his chest like he was Captain Friggin’ America in charge of the planet.

He looked angry, which didn’t make sense. She was the wronged party here! He’d practically attacked her, for Pete’s sake.

She took a deep breath and tried to act as if running into her ex was an everyday occurrence. “Well, well, well, if it isn’t Tom Donalan. I see you still have all your teeth.”

He blinked and shook his head. “What?”

I see you still have all your teeth.

Allie pasted a smile to her face and tried again. “You need to be more specific. What, as in, what’s my favorite color, or what do I have programmed on my DVR for tomorrow night, or what—”

“What, as in, what are you doing inside this building?”

She narrowed her eyes at him. “I could ask you the exact same question. Where’d you come from anyway?”

“I was driving by and I saw a car in the parking lot. So I stopped to investigate. Now it’s your turn. What are you doing back in town? I thought you lived in Tampa.”

He knew where she lived? “I don’t need a reason to come back home. Certainly not one I need to run by you, anyway. And I thought you lived in Atlanta.”

“So are you going to answer me or not?”

The way he stared at her made Allie squirm. Instinctively, she went to run a hand through her hair then remembered that she’d pulled it back in a ponytail. She didn’t need a mirror to know exactly what she looked like. Ratty shorts, skinned up knee, no makeup. Her When-I See-Tom-Donalan-Again-Revenge-Fantasy was officially zero-for-two now.

“I don’t have to explain myself to you,” she said.

He shrugged in a way that made her want to punch him. How could she have ever thought the two of them were kindred spirits?

“Suit yourself,” Tom said. “But you have about three minutes before the cops show up, and if you don’t want me to press charges you better have a damn good reason for breaking into my building.”