That Man of Mine – Maria Geraci 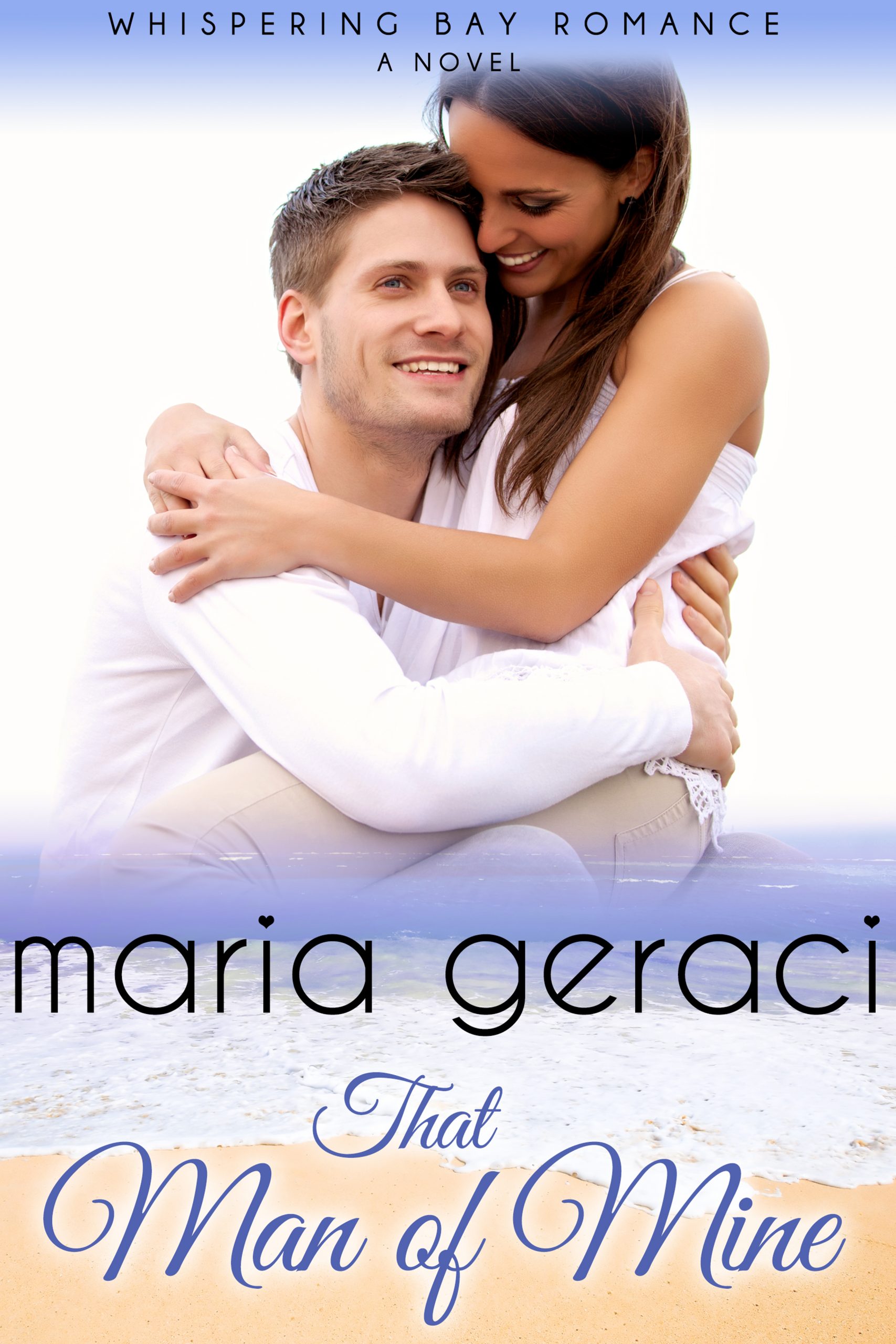 That Man of Mine

She’s the mayor. He’s the town’s chief-of-police. They have two kids, a dog that drools and a marriage that’s in trouble.

When Mimi Grant becomes mayor of Whispering Bay, she gets a whole lot more than she bargained for. The town’s annual festival is in financial ruin and the former stay-at-home mom doesn’t have a clue how to fix things.

Hunky Police Chief Zeke Grant isn’t happy that his estranged wife has just become his boss. But for the town’s sake, he’s willing to swallow his pride and let her order him around—to a point.

While Mimi and Zeke continue to butt heads on how to get things done, there’s one thing they can’t help but agree on: their chemistry is hotter than ever.

When a robbery threatens to derail the annual festival, some of the town’s residents question Mimi and Zeke’s ability to keep Whispering Bay safe—as well as keep their war-torn personal life out of civic business.

Now Mimi and Zeke must team up to solve the crime and decide once and for all if it’s time to move forward with separate lives, or if true love really does conquer all.

“I fell in love with all the characters of Whispering Bay but as a Janeite, I love a tall, dark, handsome, brooding man and let me tell you Zeke fits this bill perfectly!”
-- Margie’s Must Reads
“I LOVE this book. Don't get me wrong I totally love the first two books in this series, but That Man of Mine is absolutely my favorite. I have been waiting for Mimi and Zeke's story since the beginning. For some reason I have just been drawn to this couple, and Maria went above and beyond with them. *Seriously Maria...Super fantastic job!* I could not put this book down, thank goodness I'm an insomniac lol.”
-- Amber, Goodreads Reviewer
“That Man of Mine was worth the wait! I have been waiting to read this book since I read the first in this series - "That Thing You Do" and I was not disappointed… What I really like about this book is that it's about a more mature romance. It just seems real. It has steamy sex scenes, it has funny sex scenes, it has Wild Kingdom sex scenes. It has two people fixing a not so perfect marriage.”
-- 5 Star Amazon Review

Eighteen years ago (more or less) …

Once upon a time there was a seventeen-year-old girl named Mary, who found herself in the family way. (No, not that Mary.) But, there was a similarity in their stories that women of all ages were all too familiar with. Both Marys had gotten inconveniently pregnant. One, by Divine Intervention, and the other…well, let’s just say it was the sex that had been divine.

Mary, more formally known as Mary Margaret, and better yet by her nickname, Mimi, had just turned in her senior English project when she was hit by an uncontrollable wave of nausea. She barely made the girls’ bathroom in time for what would be the first of many mornings spent worshipping a porcelain throne. It was mid-December and her period was a week late, but the stomach flu was going around, so she wasn’t too worried (and denial wasn’t just a river in Egypt).

But then when another month went by, and still no period, it was time to face facts. Despite that she’d been infinitely careful, there was definitely every possibility in the world that she just might be pregnant. So on her way home from school she stopped by the local CVS with plans to buy a home pregnancy test. As luck would have it, her mother’s best friend, and Whispering Bay’s biggest busy body, Denise Holbert, was there, too. So instead, Mimi bought a pack of gum and a copy of Seventeen magazine (Leonardo DiCaprio was on the cover!) and slunk out the door.

Mimi knew she should go back and buy that test. But within a few weeks the nausea had subsided, and school was so busy. There were college applications to fill out and essays to write and she didn’t look pregnant (she studied herself nightly in the mirror behind her bedroom door). Yes, her boobs were gloriously perky, but her stomach was as flat as ever. And her periods had never been regular. So it was easy to pretend that everything was okay. At least, for a while it was.

But when April came around and her mother insisted on taking her shopping to buy a new dress for her upcoming high school graduation, the kaka hit the fan. The look on Ann Powers’ face when she spotted her only daughter in nothing but her bra and panties was a moment Mimi would never forget.

“How could you?” her mother wailed, as if Mimi had gotten pregnant just to spite her.

“I…” There was nothing she could say to keep her mother from going into full blown hysteria in the Dillard’s’ Department store dressing room.

“Who’s the father?” Momma demanded once the shouting stopped.

“Zeke Grant!” In all fairness, Mimi could have probably said Prince William and gotten the same reaction. But most likely not. “He drives around town on that motorcycle of his, smoking pot and hanging out at the beach all day!”

“How would you know?” Mimi shot back in a rare show of defiance. Not that Mimi was particularly timid. She always spoke out whenever an injustice was being perpetrated, but only if it involved someone else. It wasn’t that she lacked self-esteem; it was that she rarely did anything to catch anyone’s attention, good or bad, so she’d never been put in this type of situation before.

“Because you’re not the only girl in Whispering Bay who’s been…despoiled by that juvenile delinquent!”

Zeke Grant, Despoiler of Virgins. It nearly made Mimi giggle, except…Momma was right about the hanging around the beach all day. She was right about the pot smoking, too. Whispering Bay might be small, but Zeke and Momma didn’t exactly run in the same circles, so Mimi had no clue how Momma got her information. Zeke had graduated high school with Mimi’s older brother, Luke, but the two of them hadn’t been good friends. Plus, Luke was away at college, so he couldn’t possibly be Momma’s source.

In Zeke’s defense, he did have a job. When he wasn’t at the beach, he worked as a mechanic at Bert’s Garage. Not hoity-toity enough for Ann Powers, but Zeke was only nineteen. And he was smart. Not just book smart, but street smart. Working at the garage was temporary.

“What do you mean I’m not the only girl?” And then, because she was on a roll and couldn’t seem to help herself, Mimi added, “And how do know I was a virgin?”

Mimi instantly felt contrite. She hadn’t wanted to shock her mother, or pick a fight, either. “I’m sorry. I didn’t mean that. I…I haven’t been with anyone else,” she confided.

This seemed to quell Momma’s anger. “You’ll have to postpone your first semester at Duke. Unless…when is the baby due?”

“When was your last period?”

Momma studied Mimi’s tummy with a keen eye. “You’re still thin enough that no one can tell if you have on the right clothes. We’ll have to go away for the summer, of course. Maybe we can stay at your uncle’s cabin in North Carolina. It’s not far from Asheville. I’m sure there are plenty of good hospitals in the area. Once we’re up there we can look into adoption agencies.”

Mimi instinctively placed her hand over the firm lump in her tummy. In response, she felt a small kick. It was time she faced the music. It wasn’t gas bubbles she’d been feeling the last two weeks. It was her baby moving. Her baby. And Zeke’s.

“I’m not giving my baby up for adoption,” she whispered fiercely.

“Don’t be so selfish, Mary Margaret. What kind of life can you give this baby? You’re not even eighteen yet. You’ve no job. No skills. Your father and I aren’t going to help you with this. You won’t be able to manage Duke on your own. You’ll end up a single mother on welfare. Is that what you want?” When Mimi didn’t answer, she persisted. “What does your Romeo think of this baby?”

“Then he’s as much a fool as you are.” Her mother stilled. “What do you mean he doesn’t know? One look at you and… When was the last time you saw this boy?”

Mimi realized her mistake too late. “Not so long ago.”

“He’s moved on to someone else, hasn’t he?” she demanded. Her blue eyes softened. “Darling, please let me help you. Don’t let one mistake ruin your life.”

But no matter how much Momma pleaded, it was no use. Mimi had already made up her mind. It wasn’t that she particularly wanted to have a baby when she was practically a baby herself. Or that she didn’t want to go to college. But from the moment she laid eyes on Zeke Grant, standing by the bowling alley, a beer in one hand, his dark eyes raking her from top to bottom, she’d known what women had known for generations before her.

There was something about a bad boy that made a good girl go stupid.