Come and Get Your Love – Maria Geraci 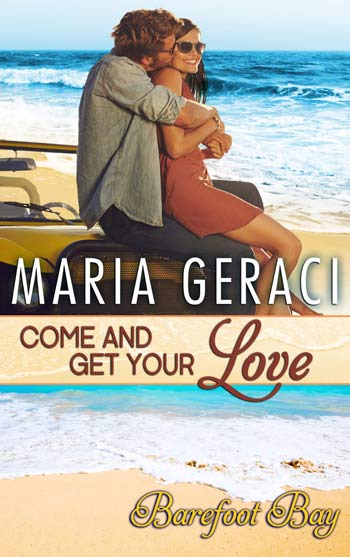 Come and Get Your Love

Brian “Boom-Boom” Callahan might have a million dollar swing, but his bad boy rep has gotten him in trouble with his major league baseball team, so he’s been temporarily sent down to the minors to teach him a lesson.

Aubrey Adams’ fledgling PR firm has been hired to keep the Barefoot Bay Bucks’ new hotshot hitter under the radar. All he has to do is play nice for the rest of the season and she’ll get a much needed bonus to keep her company afloat.

Being sent down to the minors is Brian’s worst nightmare, but one look at Aubrey and he decides that the next four weeks might not be so bad if he can get the cute brunette to warm his personal bench. Aubrey’s not about to be anyone’s groupie, especially not to a spoiled athlete whose batting record is only surpassed by the number of women he’s reported to have bedded.

But when Brian lays on the charm, Aubrey finds herself falling for the funny, kind, and intelligent man he hides from the press. When a well-intentioned gesture gets unexpected national publicity, Aubrey has to decide if she’s up to playing in the big leagues, or if she’s just being played.

“Come And Get Your Love by Maria Geraci....This was a Boom Boom home run for me, so sweet, fun and super sexy. I loved the characters, Brian a hot professional baseball player and Aubrey a beautiful PR person hired to keep Brian in check. Maria Garaci is amazing at writing books that keeps the readers invested in the characters.”
-- 5 Star Amazon Review

“Oh my God! You’re that guy that hit the home run!” The blonde leaned across the bar stool and placed her hand on his inner thigh. Normally, stuff like this didn’t bother him. He was Brian “Boom-Boom” Callahan and it was part of the package. He was nice to his fans. Nice to the reporters, who one day might not care what he had to say. And especially nice to the groupies, who he’d learned a long time ago to smile at and avoid, because nothing good ever came from a one-night stand with a woman who only wanted you because you were famous.

Right now, however, it took everything Brian had to be that nice guy. He shouldn’t have gone out tonight, not in the foul mood he was in, but it was a team tradition. After every home game the guys who didn’t have families (and occasionally, some who did) came out to The Bomb Shelter, the local bar that catered to fans of their major league baseball team, the Tucson Bombers. Normally, even after a loss, team spirits were high. But not tonight. Tonight sucked donkey balls.

“How’s it going, darlin’?” he asked, discreetly shuffling in his seat so that the blonde had no choice but to remove her hand.

“You’re Boom-Boom, right?” Her words were slurred, but she wasn’t the only one who’d had too much to drink. The whole team was half way to falling down around him. They’d been doing tequila shots for the past hour, but not Brian. He was too depressed to get drunk. Even though they were a month away till the playoffs, tonight’s loss had cemented the Bombers’ position in the division. It didn’t matter if they won every game from here on out, they’d still be where they were. Last fucking place with nowhere to go.

Not because of him, though. He’d had a stellar season. And tonight had been no different. He’d hit two singles, a double and a home run. Not that it did any good with a pitching staff riddled with so many injuries they might as well be part of The Walking Dead cast.

“Boom-Boom Callahan, that’s me.” He drained his beer and signaled the bartender to close out his tab.

The blonde leaned in. “I’ve heard some really big rumors about you,” she purred into his ear.

Her eyes widened. “But you don’t even know what they are!”

“I can only imagine.”

“You’re funny!” She giggled, and for a moment, he thought about going for it. It had been too long since he’d gotten laid. His last relationship had ended almost six months ago and he’d been living like a monk. But he didn’t take advantage of drunk women.

“Can I take a picture with you?” Before he could answer, she whipped out her cell phone and leaned back against his chest, positioning herself for a selfie. He automatically smiled as the flash went off. “Thanks!” She eyed him like a prize hog at the county fair. “So don’t you want to know about that rumor?”

He was about to tell her no, he really didn’t want to know about the rumor, but she whispered it in his ear anyway.

God Almighty. He’d heard it a million times before and it still made his ears go red. “Sorry to disappoint you, sweetheart, but that’s not how I got the nickname Boom-Boom.”

A strong arm came from behind to wrap around his neck in a playful chokehold. “Nope,” said Austin Malloy, the team’s short stop and Brian’s best friend since the two of them had been drafted eight years ago. “He got that nickname because he can hit a ball better than anyone in the game.” Austin put his hands together to imitate a swing. “The first boom is when the ball strikes his bat, and then the second boom is when said ball flies out of the stadium. Get it? Boom-Boom!” He lowered his voice into game announcer mode. “And it’s another homerun for Brian Callahan!”

She eyed Brian with renewed interest. “So you’re a big star, huh?”

Brian shrugged. Big was a relative term, especially when you played for a losing franchise like the Bombers. The blonde openly gaped at Austin. “And you’re on the team, too?”

“On the team? Baby, I am the team.” Austin winked at him and turned his full attention to the woman, who openly welcomed it.

Brian smiled to himself. As far as wingmen went, Austin was the worst, or the best, depending on how you looked at it. He had absolutely no interest in the blonde, and his friend knew it, so Brian welcomed the steal. He got up from his seat with every intention of leaving the bar, but on his way out a couple of his other teammates enveloped him into a group man hug.

“Big Daddy” Pedro Gutierrez, the team catcher, eyed him solemnly. “Are you okay to drive, Boom-Boom?” Pedro was thirty-eight, on the old side to be a catcher but still the best at his job in Brian’s opinion. Pedro’s knees, however, had other ideas. Pedro had announced he would retire at the end of the season and Brian hated for his friend’s career to end on a losing streak.

“No worries. I’ve just had one beer, but in any case, I’m Ubering it tonight.”

Marcus Jeffers, their third baseman, who’d been having a rough last month, reeked of alcohol. “It’s not fair…not fair at all,” he said, slurring even worse than the blonde had. “We can’t help it if our pitching sucks.”

“Our pitching doesn’t suck,” Pedro said, ever the team cheerleader, “not when our guys are healthy, at least.”

“Did you hear the news, Boom-Boom? I’m going down to the minors.” Marcus’s voice wavered on the edge of tears. “A couple of crappy games and I’m done, man.”

“No way.” Pedro caught Brian’s eye and silently nodded. “Shit!” The expletive came out louder than Brian intended, but he didn’t care. Marcus was an A plus player who didn’t deserve to be sent down.

“That they’ll get rid of Neil?” Pedro shrugged. “All I know is that none of us are safe right now.”

The team had been sold a couple of weeks ago and the new owners were out for blood. It wasn’t fair that they were giving Neil Jorgensen, the Bombers’ long-time manager, a hard time about the team’s losing season. Every team went through its ups and downs. Neil was a fine manager who worked hard to bring out the best in his players and Brian respected him. Brian was Arizona born and bred. He’d grown up in the mountains of Sierra Vista and played college ball for the Wildcats. He’d never played professionally for anyone but Neil Jorgenson, and he didn’t want to either.

Tonight was getting worse by the second.

“You’ll find yourself back here in no time, man,” Brian said, trying his best to give Marcus some encouragement.

“That’s right,” Pedro agreed. “You’ll be back. I was sent down for a season in my third year. It was the best thing that ever happened to me.”

“Really?” Marcus said, and Pedro nodded, although none of them really believed it right now. “It’s just… Carina and the kids. How am I going to tell them? And my parents? They’re so damn proud that I’m a Bomber, and now…”

He shook his head, unable to finish his sentence, and Brian was struck by the precariousness of their positions. Their careers, their livelihood, the game they loved—all of it was out of their control. He’d never felt so helpless before. What would he do if he was Marcus? If he was the one being sent down to the minors?

A river of cold dread snaked up his spine, making him shiver. His head throbbed from the loud music and his right elbow needed to be iced, but that would have to wait till later. Five minutes ago he was on his way out the door but he couldn’t leave Marcus in his hour of need.

“Let me buy you a drink,” Brian said.

Pedro frowned. “You sure that’s a good idea, Boom-Boom?”

Marcus brightened. “Excellent idea, dude! Let’s get totally shit-faced until we don’t care if we ever see a baseball again!”