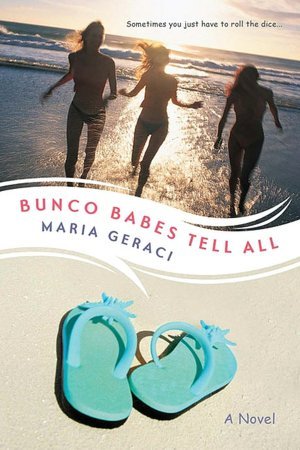 Sometimes in love you just have to roll the dice...

Meet the Bunco Babes of Whispering Bay. Every Thursday night they roll dice, drink frozen margaritas, and catch up on all the gossip in their small north Florida town. Kitty Burke is the only Bunco Babe who is still single—which is okay—but she’s thirty-five and may need to face that her image of Mr. Right is all wrong.

Take Steve. Very sexy—but on paper, with three failed marriages and a shady career, maybe not great husband material. And yes, his ring tone is “Freebird.” Certainly fellow Babes Shea Masterson and Pilar Diaz-Rothman vote thumbs down. But maybe there’s more to Steve than meets the eye? Is it time for Kitty to take a chance and hope that she can be as lucky in love as she is in Bunco?

“Geraci's sexy, funny debut is an emotionally satisfying story of love, friendship, family and community. ”
-- The Chicago Tribune
“Bunco Babes Tell All is a refreshing story about the importance of women's friendships crossed with the situational humor of a romantic comedy. ”
-- Sacramento Book Reviews
“Maria Geraci has become my new favorite author of 2009! I can't wait to read her next piece of work.”
-- Recommended Read, Fallen Angels Reviews
“This book had everything for me, sex, romance, laughter, and even a slight mystery, but as they say, What happens at Bunco, stays at Bunco! ”
-- Publishers Weekly Beyond her Book Blog

It was all Kevin Costner’s fault. If he hadn’t been so sexy in Bull Durham, Kitty Burke wouldn’t still be single on the eve of her thirty-fifth birthday.

For her grandmother, it had been Clark Gable in Gone with the Wind. For her mother, it had been both Paul Newman and Robert Redford in Butch Cassidy and the Sundance Kid. At some point, almost every woman fell in love, or at least in lust, with a character from the big screen. But most other women got over it and went on to marry normal men.

Eighteen years ago, she fell in love with Crash Davis, the character Kevin had played so brilliantly in the film. Which wouldn’t have been that big a deal. Except that no flesh and blood, real, live man had ever come close to giving her the spine-tingling, mind-melting, heart-stopping sensation she got from watching Crash.

It’s not that she hadn’t tried to find a guy who made her feel all that. But after half a lifetime of dating the Ebby Calvin ‘Nuke’ LaLaooshes of the world, it was time to face facts. As her best friend Pilar had said, time and time again, “Crash Davis is a fahottie. He doesn’t exist.” Despite Pilar’s irritating habit of making up words you couldn’t find in Webster’s Dictionary, Kitty had come to the depressing conclusion that, as usual, Pilar was right. Crash Davis was nothing more than a fantasy hottie.

But that was okay. Because as of today, Kitty was officially over it.
So what if she was the only one of her friends not married? The rest of her life was perfect. She had a great job selling real estate, a fantastic income (well, maybe not so fantastic in the last couple of years, but things had to start picking up soon) and she had recently moved into her grandmother’s old place just two blocks from the beach. In north Florida, life didn’t get much better than that.

But what made Kitty’s life really special was her Bunco group. The Bunco Babes of Whispering Bay had been established ten years ago by what Pilar referred to as the “the nucleus”. The nucleus consisted of the three founding members; Kitty Burke, Pilar Diaz-Rothman, and their other best friend, Shea Masterson. Exactly who the protons or the neutrons were, Kitty wasn’t sure, although she was fairly certain Pilar did. But whoever was what, one thing was indisputable. Admission into the Bunco Babes was exclusive. No one got in without the unanimous consent of the nucleus. There were nine other members (the electrons, so to speak), for a total of twelve Babes. For the past ten years they had been there for each other through boyfriends, marriages, babies, spreading hips and sagging boobs.

With friends like the Babes, who needed a man?

If Susan Sarandon could worship at the Church of Baseball, then Kitty could worship at the Church of Bunco. It was every Thursday night while rolling the dice and chugging frozen margaritas that Kitty found her true salvation. It was the friendship of those eleven other women that provided the balance in her life. The yin to her yang. The cherry on top of her hot fudge sundae.

Tonight however, a perfectly nasty imbalance was taking shape in the form of an overflowing toilet.