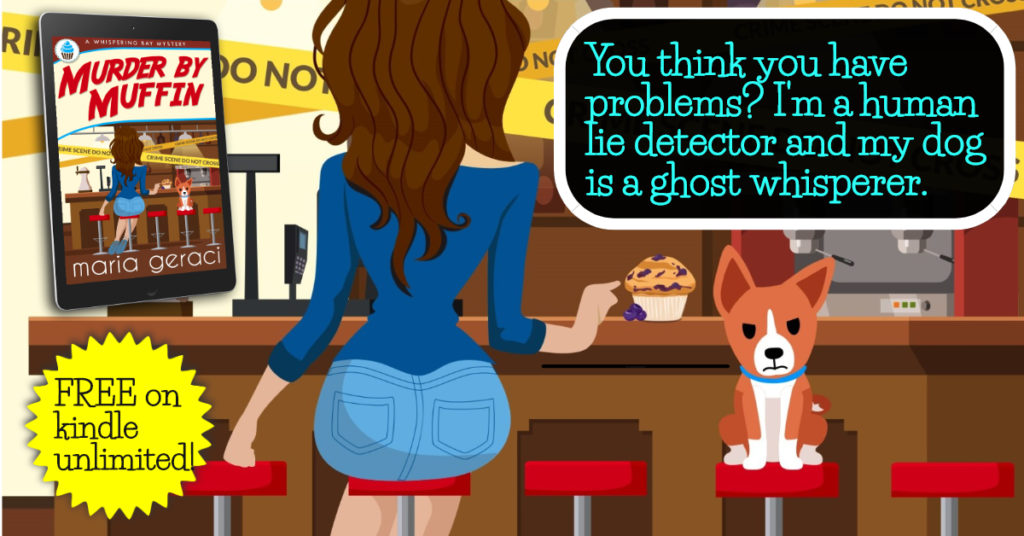 I’m excited to announce that the third book in my Whispering Bay mystery series is finally here! Murder By Muffin has all your favorite characters from Whispering Bay returning, including of course, Lucy McGuffin, my amateur sleuth, and her little rescue dog, Paco.

She’s a human lie-detector, a “gift” she tries hard to keep hidden.

Her rescue dog, Paco, is a ghost whisperer.

And someone’s just been found murdered in her kitchen.

The murder weapon? One of Lucy’s apple walnut cream cheese muffins. The victim? The producer for a reality TV cooking competition that Lucy is determined to win. Lucy and the producer had some very public words the day before the murder. When it’s discovered that Lucy’s café was about to be disqualified from the show, all fingers point to Lucy as the prime suspect.

Travis Fontaine might be Whispering Bay’s newest heartthrob, but the know-it-all cop and Lucy have butted heads in the past. He doesn’t believe she’s guilty, and he’ll prove it. Himself. Without any of Lucy’s “special” help, thanks.

But Lucy isn’t about to sit back and let her goose get cooked. With her best friend, Will, and her dog, Paco, by her side, she sets out to solve the crime before someone gets away with murder.