Some of you might have noticed (okay, you probably didn’t notice) but the “publisher” button on some of my books have changed. Where it used to say Maria Geraci (publisher) it now says Chihuahua Publishing. And yes, there’s a story behind it. 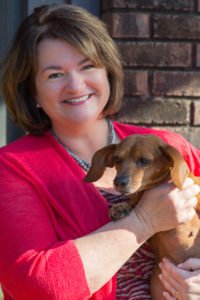 Back in the day when my agent was trying to sell my first book to New York (no, my first book didn’t sell, but my second did!) I was getting that daily barrage of rejection emails that all writers get. Some were harder than others. I think the standard “this just didn’t work for us” was almost better than those rejections that came after a publishing house would show interest and the project was oh so close to getting bought, but for some reason or other, just didn’t make the cut.

After one of those “close, but no” rejections, I was in the kitchen trying to cook dinner for the family when Mike Geraci came home from work. Usually, I’m a pretty upbeat person, but that night I was down. He noticed right away and asked what was wrong. I burst into tears and told him that I’d received another rejection letter and I just didn’t think I’d ever get published.

He hugged me and told me no worries. If New York was too dim to see my talent, then we’d just start our own publishing company and we’d name it… Chihuahua Publishing! Of course, I laughed and felt much better about everything. I have to say, Mike Geraci was pretty much ahead of the times because this was 2007 and the only “self publishers” out there were vanity presses.

Fast forward to January of 2008 on a cold north Florida evening. It was damp and chilly and I had a miserable cold. I remember this so well because I was laying on the couch watching one of my favorite movies AN OFFICER AND A GENTLEMEN. Right in the middle of Louis Gossett Jr yelling at Richard Gere (Mayo-naise!) I got a phone call from my agent. My pulse began to race because usually she only called if she had good news.

Berkley (an imprint of Penguin) wanted to buy my book. I was thrilled. Over the next few years, Berkley bought 3 more books. It was great to see my babies in real life brick and mortar stores. The 4th book (A Girl Like You) was nominated for a  RITA®, Romance Writers of America’s highest award of distinction in the romance publishing industry. It didn’t win, but it was one of the highlights of my writing career.

Fast forward a couple more years. I didn’t sell anymore books to Berkley (and that was okay). I wanted to try self-publishing. So I did it first with the help of my agent, and that was a great learning experience and a terrific way to dip my toe in the water. Then I got the rights back to those books (my first 4 Whispering Bay romances) and published them under my name. Then I put out a 5th book, and today, my 6th Whispering Bay romance is out in the world! I decided it was high time to start that little company that Mike Geraci envisioned a decade ago.

Today, I’m nominated for my second Rita, as well as a National Readers’ Choice Award for the 5th book in my series (This Can’t Be Love). I’m working on a Whispering Bay spin-off cozy mystery series as well as another romance series and I couldn’t be happier.

Sometimes dreams really do come true! Oh, and yes, I really have my own chihuahua! (and a dachshund too!) 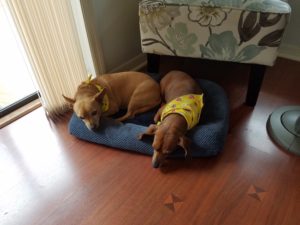