I have good news and bad news.

The bad news? The pub date for THIS CAN’T BE LOVE has been pushed back to February 28, 2017. I really thought that I’d have this book out by now, but my son’s wedding totally dominated my entire October (in a totally awesome way. Welcom 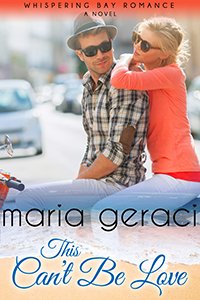 e to the family, Rachel Geraci!).

The good news? It’s on pre-order, exclusively on iTunes for the reduced price of $3.99! Once the book goes live on February 28th, that price will go back up to $4.99, so if you read on an Apple device, now is the perfect time to get it on sale! Here’s the link.

One thing Sarah knows for sure is that she’s never going to end up like her mother who’s spent years hopelessly in love with a man who deserted her. Sarah is in Whispering Bay long enough to help out a friend, then she’s off to greener pastures. Spending a few weeks with the attractive, but acerbic Luke, won’t be any skin off her nose. Except, the two of them have more in common than she originally thought, and those blue eyes of his have a way of making her panties melt.

As things between them begin to heat up, Sarah and Luke have to admit, they’ve definitely fallen in lust with one another. But in love? No way.