Looking for a sexy tearjerker? Here you go – Maria Geraci 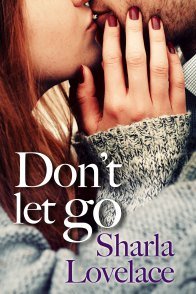 My friend Sharla Lovelace has a new book out. Squee!

Sharla is a wonderful writer. I’ve read all her books, but this new one is my favorite. I was first introduced to Sharla’s work a couple of years ago when I read her debut novel, The Reason is You. I picked it up because I loved the cover and we shared the same editor at Berkley (the fabulous Wendy McCurdy). I became an instant fan.

Then, as coincidence would have it, Sharla and I were both nominated for the RITA last year in the Novel with Strong Romantic Elements. I’d already “met” Sharla online, but boy, did we hit it off in person. Love the author, love the person? In this case, yes! Funny, warm and down-to-earth, her books read like her.

Here’s a little about Don’t Let Go. Warning: this sexy romance will make you break out the Kleenex!

Noah Ryan and Jules Doucette spent every moment together, first as best friends and later as young lovers. The two had planned a life together—until one unspeakable decision tore them apart for good. Twenty-six years later, Jules is still carefully living the life her mother planned out for her. She’s running her mother’s store, living in her mother’s house, following her mother’s rules, and keeping the secrets her mother made her bury. Then Noah comes home and any sense of an ordered life flies out the window. Noah’s return does more than just stir up old memories—it forces Jules to see her life in a whole new way and uncovers secrets even she didn’t know were buried. Secrets that could easily destroy her world once more.

2 Replies to “Looking for a sexy tearjerker? Here you go”