Writing is hard work, but so is giving acceptance speeches – Maria Geraci

Writing is hard work. And each book g 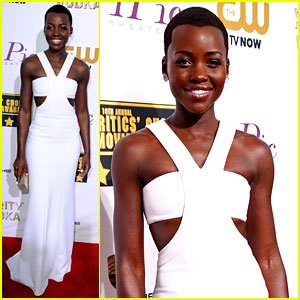 ets harder. I’m not sure exactly why that is, but it’s true for me and I’ve heard other writers say it, so I think it’s probably true for most of us. Glad I am not alone 🙂 In the midst of all this profound thinking last night, I was channel surfing (when I should have been doing some incredibly hard writing) and stumbled upon the Critics Award show.

I LOVE awards show. I saw most of the Golden Globes and always always watch the Oscars. Mostly because I love movies but also because I love the voyeuristic aspect of seeing celebs at both their worst and their best (awards shows tend to bring those extremes out).

So anyway, last night the little part of the Critics award show I did watch included seeing Lupita Nyong’o win for Best Supporting Actress for her role in Twelve Years a Slave. She looked gorgeous. That white dress doesn’t do anything for me but she totally rocked her entire look. As for her acceptance speech? Lovely. She thanked everyone and while she appeared nervous (I mean, who wouldn’t?) she seemed to hit all the right things to say.

She mentioned every actress nominated in her category but omitted Oprah Winfrey (nominated for The Butler) who up to that point had been shown giving Lupita a teary standing ovation. Yes, Oprah has tons of class.

I have to admit I cringed. And apparently so did the camera man/woman, because the Oprah standing ovation was quickly cut away. I’m not sure who I feel worse for. Lupita or Oprah. Probably Lupita. I’m sure Oprah understands how hard it is to be swept up in the moment of winning and to forget to mention someone in your speech.

Back to my own hard work, where I am glad I get a do-over in the form of Editing 🙂