Time for another RITA nominated book review. This week, it’s The Haunting of Maddy Clare by Simone St. James. 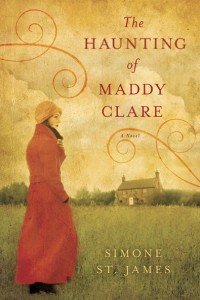 Sarah Piper’s lonely, threadbare existence changes when her temporary agency sends her to assist a ghost hunter. Alistair Gellis – rich, handsome, scarred by World War I, and obsessed with ghosts – has been summoned to investigate the spirit of nineteen-year-old Maddy Clare, who is haunting the barn where she committed suicide. Since Maddy hated men in life, it is Sarah’s task to confront her in death.

Soon Sarah is caught up in a desperate struggle. For Maddy’s ghost is real, she’s angry, and she has powers that defy all reason. Can Sarah and Alistair’s assistant, the rough, unsettling Matthew Ryder, discover who Maddy was, where she came from, and what is driving her desire for vengeance – before she destroys them all?

WHAT I LOVED ABOUT THIS BOOK:

1. This book is spooky.  And I mean Spooky with a capital S. I have to admit to reading into the wee hours of the night, only to want to turn the lights back on. The ghost in this book is downright scary and I had no idea of what was going to happen next. Talk about pulse pounding!

2. I have to admit to being a little surprised by the romance in this book. Without giving away too much, I’ll just say that there was more romance than I thought there would be (a good thing!) and that I loved the hero, the “rough and unsettling” Matthew Ryder. He’s so tortured 🙂

3. Loved the protagonist’s arc! Sarah goes from slightly timid to completely competent. Large and in-charge. Exactly the way I like my heroines.

4. Great historical era. Set in England a few years after the end of WWI, this book not only deals with the paranormal, its also addresses post-traumatic stress disorder in military vets.

5. Terrific ending! Justice prevails. The Bad Guys get their due punishment and love conquers all. Which is exactly how I like my books to end.

Here’s a snippet from the book (WARNING: be prepared to be scared!). Set up: Sarah is making her first contact with Maddy, the ghost.

There was a trickle of icy air on the back of my neck. I felt the hairs stand up like tiny pins, painful on my skin; a swift unearthly inhalation, choking and clogged.

And then she grabbed me.

I could not scream. I tried and tried, my mouth open, as I gasped for air; tried and tried and tried to scream, in a terrible pantomime I would relive in my nightmares for months to come. I was frozen, unable to move or run, and an icy grip took my upper arms, and lifted me from the floor.

The grip pinched; it was so cold, it pierced the skin of my arms with pain. I kicked my legs, only faintly, as I could hardly move, and tried to wriggle from the hold, but it was like iron. I was lifted, suspended, unable to get away. It was like being caught in a giant spider’s cocoon, invisible and inescapable.

There was a voice, but it was not human. It was not a voice. It was in my head, deep inside my brain, and it was indescribable.

I can smell him on you, it said.

I tried and tried to scream.

The grip pulled me higher.

Through my haze of panic I thought briefly of Alistair, hugging me before I came here. That simple, friendly hug. It was a lifetime ago.

By pure instinct, I tried to shut my thoughts down. I would not think of Alistair–would not give him to her. I shut my mind, thought of nothing.

There was a low, sickening chuckle deep in my brain. I thought I would go mad.

And then: Bring him to me.

Told you! I have to admit, I was scared just typing all that out!

Next week: THE WELCOME COMMITTEE OF BUTTERNUT CREEK.

Have a great Memorial Day weekend!