Yes, you read that correctly. I’m using the present tense of the verb think because now we don’t have to guess what Jane would have thought, because Jane (drum roll, please) is alive and well on Twitter.

Okay, so maybe it’s just a bunch of Jane Austen addicts who tweet quotes from the famous author, but hey, what a fun thing to pop up on your Twitter screen!

And speaking of what Jane Austen thinks, I wonder what she would have thought of the yummy Jonny Lee Miller playing her Mr. Knightly. I recently watched the 2009 BBC version (thank you, Netflix) and I have to admit to watching the final scene where Mr. Knightly declares his love for Emma more than just a few times.

And speaking of Jonny Lee Miller, I am so digging him on Elementary.  I love whatever he does (Eli Stone, anyone?) and hope hope hope that they don’t cancel the show (I swear someone in Hollywood waits to see what new show Maria Geraci likes, then decides to can it).

On that note, I will leave you with this small gift (see below). I think top hats for men should come back. Don’t you?

Have a great weekend, everyone! 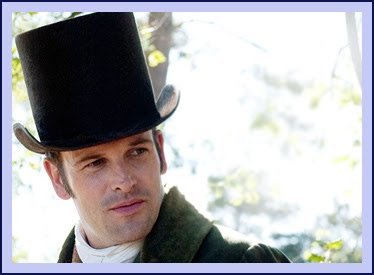