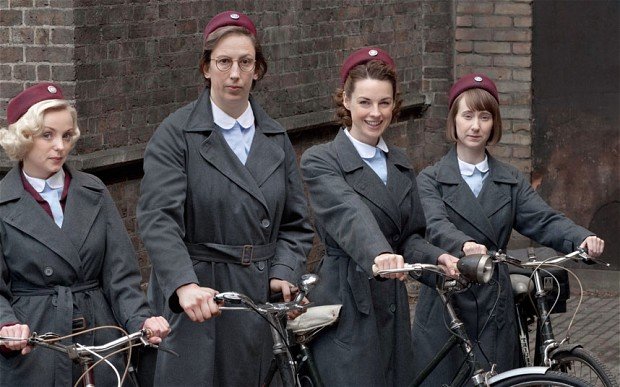 Leave it to the Brits to do medical drama right.

I just finished watching the second episode of the new BBC program, Call the Midwife, and you can officially call me hooked!

Set in 1957 in the lower east end of London, the series centers around a group of young nurse midwives who live in a convent of nuns dedicated to taking care of London’s poor women. It’s gritty and unbelievably realistic.  Besides being an author of romantic women’s fiction, I’m also a labor and delivery nurse and this is the first program with a medical theme that has managed to capture my attention. But it’s not just the baby birthin’ that has me giving this program a big thumbs up. The well written characters, the sparkly dialogue and those feisty nuns are also a huge bonus.

In this past week’s episode, they introduced a new character, Camilla  Fortescue-Cholmondeley-Browne, affectionately known as “Chummy” (and Thank God, because really, we Yanks can’t even fathom a last name like hers).  Watching Chummy learn to ride a bike was hysterical, but honestly, watching her birth a breech baby all by herself for the first time in the midst of a wedding reception? Now that’s great TV!