I saw the new HBO show, Girls, the other night.  Have you seen it? The first time I heard about the show it was being compared to Sex and The City. 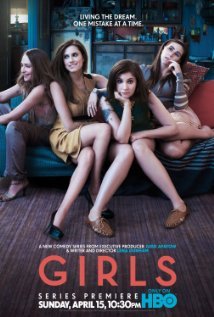 Wait. Hold on. That’s blasphemy! There’s only one Sex (And, In, and Above the City) and I truly hate comparisons that pit one thing against the other. Like, you know,  Maria Geraci is the new Sophie Kinsella (who started that rumor?).  As much as I love Sophie Kinsella, I’m nothing like her, but you get my drift. It’s a lazy marketing tool, although I guess it can be effective because it did, in fact, get me to watch the show.

So what did I think?

About the only thing Girls has in common with Sex is that there are four  single “girl” characters living in New York. While Sex was visually appealing, Girls… not so much.  And these “girl” characters are really girls. Young twenty-somethings with no careers (at least none I could see).

The first show opened with the main character, Hannah, being financially cut off by her exasperated parents. Hannah, you see, graduated from college 2 years ago and is still being fully supported by mommy and daddy.  Is Hannah embarrassed by this? Heckity heck, no! She actually has the audacity to throw the crummy economy back in her parents’ faces.

After the scene with her parents, Hannah tries to get her boss (at the place she’s been interning for free) to place her on staff. But alas! Hannah’s skills don’t include photo shop and she’s out. So what’s a single 24 year-old unemployed girl to do when she’s down in the dumps? She goes to visit one of her guy buddies for some… well, I guess you could call it pity sex. Not sure what I’d call that scene, except truly awful. Cringe worthy. And kind of brilliant.

I loved the whole thing.

Is it Sex and The City? No. It’s not. It’s something completely different. As it should be.

One Reply to “Girls”